Panem et Circenses is part of the Goals series. The series consists of several soccer goals, of which the netting is replaced by stained glass. Delvoye mixes different symbols of high and low culture, in the case of Panem et Circenses he combines symbols of religion and sports. The title clearly refers to the belief that prevailed among the Roman emperors, who organised arena spectacles in order to silence the Roman people. When one expects bread to satisfy hunger, a spectacle − cruel as it may be − may prove to be an equally efficient remedy. Naturally, this work shouldn’t just be read in a historical context. Its theme is very topical in our current society, in which people are being lulled to sleep by mass media, sports and similar events. Delvoye gets to the crux of the matter. It is clear that the ‘goal’ is too fragile and too brittle to be used in a soccer match. The goal is a useless object, superfluous, as most ornaments are.  Furthermore, a sharp critique on the Flemish, bourgeois culture is hidden in the work. Delvoye is aware that his choice for stained glass and the images he uses, refer to satirical prints by Bruegel, who pilloried similar atrocious conditions. As with Bruegel’s work, the work of Delvoye is to be interpreted as a healthy joke that is rooted in truth. Delvoye plays with our senses, our intellect and provokes our boldest thoughts. 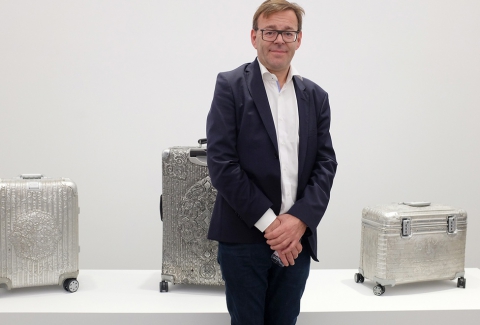