Carlos Amorales began his career in the mid ‘90s creating ‘identity loan’ objects entitled Amorales. They were inspired by a professional Mexican wrestling association named Lucha libre and by the Mexican tradition of wrestling, where athletes − like superheroes − take on a fake identity, wear a colourful mask and hide their real faces. For Amorales, the wrestling world can be interpreted as a metaphor for the struggle of the contemporary artist to survive in an often hostile and competitive art world. The theme of the Lucha libre became a means to explore personal and collective notions of identity.

Together with Ray Rosas (Fragments from a conversation) (1997) and Amorales Interim (1997), Arena Dos de Mayo is part of a video trilogy by Amorales. The trilogy deals with the popular representation of the struggle between good and evil.

In the video piece presented in the context of PLAY Kortrijk, Amorales confronts a wrestler with an artist. They are both wearing similar Lucha libre-style masks. One of the contenders possesses the skills and the knowledge of wrestling, the other one doesn’t. The tailored mask worn by Amorales, was made by a Mexican craftsman and bears comparison to a portrait of the artist’s face. 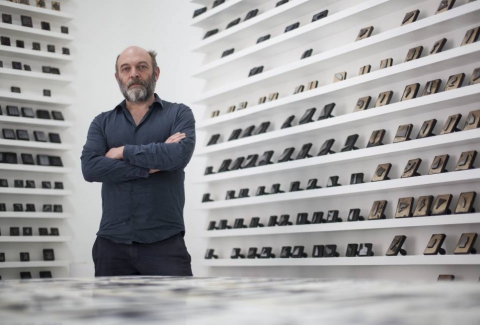